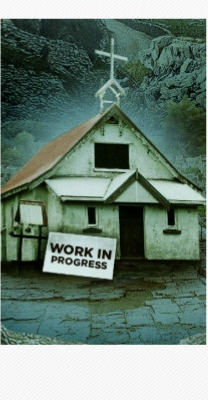 New Life Fellowship is a non-denominational church made up of people from nearly every Christian and non-Christian background. We can testify to nearly every condition that is common to humanity.

Our worship is alive and vibrant; neither traditional nor contemporary, we attempt to minister to the needs of the youngest to the oldest without alienating any generation.

God has opened the way of abundant and eternal life through his son Jesus Christ to all who will call on his name and follow with whole hearted devotion. We believe his death on the cross not only to be the atonement for our sin and purchase of our redemption, but also the pattern of a life lived in servitude to God and our fellow man. We believe the dynamic spirit of God contains enough power to unify his people and produce in their lives fruit indicative of his children. God is not willing for any of his creation to be discarded, but for all to come into intimate fellowship with him. The Church is to be a house of prayer for all people.

How is it possible that believers from so many backgrounds can come together in one place and worship? It can only be done through God’s spirit. The apostle Paul said, “Continue in the unity of the spirit until we all come into the unity of the faith.” (Eph. 4) This is our burden. Many of us have been part of gatherings that divided over small doctrinal differences and non-essentials. We believe this does not represent the love that Christ has “shed abroad in our hearts.”

We see a picture in the Old Testament of Solomon building a great temple to God, a house of prayer for all that represented the presence of God among his people. After Solomon died, men divided the kingdom and this separation led to idolatry and eventually the temples destruction. After many years of captivity, the Lord “stirred the hearts of the people” to return to Jerusalem and rebuild again this temple. It was eventually rebuilt and Jesus, the Lord of glory himself, came to that place and walked among its stones.

Jesus is the “greater than Solomon” that came to earth, through the virgin birth, and built a spiritual temple. He said to his followers, “upon this rock I will build my church.” He built a temple out of living, breathing stones, and on the day of Pentecost it was inaugurated.

After the death of the apostles, men arose speaking perverse things and drew away followers after themselves. (Acts 20) As these leaders separated the people, the power of God in the church was diminished. The empire of Rome that rejected the Christians in the first century embraced them in the third. The gospel changed, divisions occurred, and the church was carried away into spiritual darkness. At the time of the reformation, the Lord began to stir up the spirit of people to leave this condition and rebuild this spiritual temple that was torn down. Men like Luther, Wesley and the early Pentecostal leaders began to clear off the foundation and work toward its restoration.

As a church we feel the call to continue the work of the reformers. The temple is not complete and the Lord of glory is going to return. We are looking for the return of Jesus. The attitude of the reformers and all truth seekers is that the truth never suffers from investigation. We hold the word of God to be inerrant and inspired. We invite open dialog with all believers that the truth may be threshed out, as iron sharpens iron.

As Solomons temple was built on a threshing floor, Christ the greater Solomon threshed the truth when he discussed with religious leaders of his day their interpretation of the scriptures. Today Christ will inspire godly men and women to search and thresh the teachings of this present day.

Our church family is working through doctrinal, cultural and racial differences to be unified in Christ. We believe this can only be accomplished by the indwelling spirit of God. We believe God is able to put it into the hearts of his children to agree, not in the spirit of ecumenism, but through his Holy Spirit. New Life Fellowship is a “come as you are, but not stay as you are” church.

Our desire is to be transformed into full grown sons and daughters of God and to help and be helped by other of God’s creation. Come and join us in this adventure.